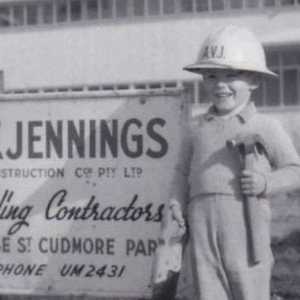 In February 1965 the school grounds had no facilities at all, other than the new buildings. There were no lawns, no trees, no courts or playing fields; just dusty clay that was poorly graded and turned into sticky sludge when it rained.

The school began with 5 buildings:

Shelter sheds - One for boys and one for girls. One of these was removed in 1970 to make room for the eastern (Open Space) wing.

What a great job was done by those original two hundred and twenty year 8 students, their parents, and their teachers (no ancilliary staff at all, except two part-time cleaners). A Library without books,  no Canteen, no sporting equipment, no funds, no subsidies until July, no typist, no phone, no radio; not even a tool for the Workshop Centre.

Hard work, cheerful co-operation, and generous contributions of money soon filled obvious gaps in facilities and amenities. After one year (1966) the intake numbers lifted to above five hundred; in 1967 there were seven hundred and fifty students attending, and by 1969 (the school’s first Matriculation year) numbers exceeded one thousand. Those first five years brought more parents with more ideas and resources, thus trees were planted, playing fields irrigated and turfed, courts paved and enclosed, the Library shelves filled, audio-visuals installed, outdoor seating and bike racks erected, not to mention a Canteen graduating from a classroom to a structured porch.

Not long after, change rooms and outbuildings were erected, and blocks of "temporary" wooden classrooms, laboratories, art rooms and music rooms overcrowded the eastern yard. One of these, as well as some one hundred bicycles, went up in flames in 1969 during building extensions.

The next decade saw a number of large developments take place; the most significant being the "Open Space" ground floor, topped by a new Library across the eastern end of the main building. A Canteen was built following the removal of one of the shelter sheds, and a pergola erected alongside to provide shade for students during their breaks. The temporary porch Canteen had become a study area as had the old upstairs Library. The downstairs classrooms of the northern wing lost their dividing walls to support the "open teaching" style of the 70s-80s.

By the mid 80s the pressure for space dominated developments in the school. A corridor, a store room and two seniors’ rooms were eliminated to enlarge the over-crowded Staff room and to create “The Gallery”. Cloak room areas which were not being used were divided to form a printing room, a book store room and faculty offices. Conversions were also made in the learning areas with the Art Senior, Geoffrey Rainsford proposing that the upstairs classes be handed over to the History and Geography faculty and the triple block adjoining rooms on the ground floor Centre wing be converted to Art Rooms. Later, half of the remaining shelter shed was converted to an additional Home Economics centre. Similarly, with the high demand for Metalwork, one of the Woodwork areas was converted to Metalwork, a plastics room (formally the drawing room) was enlarged and a Photography room built.

In 1985 “the Courier” News printed an article about the official launch of a new year 12 common room, a room planned and built by the school Council with the tiling and carpeting done by the year 12 students.