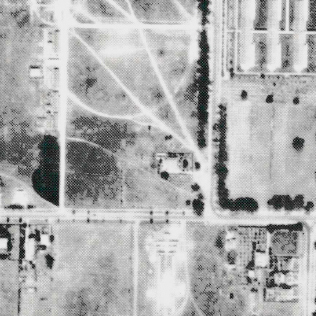 Springbank Secondary College is located in the southern Adelaide suburb of Pasadena, on the corner of Goodwood and Daws Roads. It was opened in 1965 as Daws Road High School and operated until 2001 when it was renamed Pasadena High School.

The Springbank name reflects the history of the local area and was the location of the former Springbank RAAF Camp during World War II. The site was renamed in October 2018 to reflect the redesigned school.

Two hundred years ago, it was woodland territory of the Kaurna tribe. A hundred years ago, open pasture. 75 years ago, the beginnings of a pattern of galvanized iron huts and sheds for a World War Two military camp, later to be taken over as a post-war Migrant Hostel. Then, fifty years ago, in February 1965, a high school opened on its ten acres, facing Daws Road. Not a tree in sight except for a fine row of lofty sugar gums on Daws Road itself. These fell to roadworks a year later.

The area where Springbank Secondary College is located, near the corner of Daws Road and Goodwood Road has a diverse story of land use under the management of several notable pioneers before the school was erected as Daws Road High in the mid 1960s.

In the early days, parts of the land were attached to the large adjoining properties of “Clanfergeal" (Section 7) and “Portobella Farm” (Section 41) and the rest were leased to tenant farmers. Peppermint gum trees, dark, rough bark trees, like those in the Shephards Hill Reserve, dotted the landscape.

With the more recent story of “Springbank Camp” from the Second World War the land that the school stands on has a unique background dating back to the beginnings of European settlement in South Australia.

On 24th October 1838, Governor Gawler signed the document called a Land Grant to entitle ownership of Section 8, District B, later Hundred of Adelaide (eighty acres) to John Edward Bright, a surgeon on North Terrace and Abraham Hopkins Davis, storekeeper. Just prior to Christmas 1839 they transferred sixty acres over to William Henry Shephard. Later this family settled on Shephard’s Hill, Bellevue Heights. W.H. Shephard was also granted the first licence to the ‘Adelaide Tavern’ on the Franklin Street, Adelaide.

In 1841 the remaining 20 acres were sold by Patrick Fennel to John Wickham Daw (1796-1872) for the sum of £40, which was added to his existing property of over two hundred acres. John W. Daw donated a portion of his land for St Marys Church. In 1842, forty acres of Section 8 were leased to Thomas Langhorn, but transferred shortly after to William Littlejohn O’Halloran who kept the land for twenty one years. Thomas Maslin appears to have bought out William H. Shephard’s land interest for £45. In 1842 Ann and William Shephard had their second child, William Thomas Shephard.

Sadly on 29th June 1848, at the age of thirty six, William Henry Shephard died. Anne Shephard lived with family in Wright Street, Adelaide for a year following his death, until relocating the family with the help of a benevolent relation in England who purchased land through Thomas Maslin, to what is now known as Bellevue Heights. After William Henry Shephard's death the family properties were put in trust to Thomas Maslin for the sole benefit of Anne Shephard and her children for the term of her natural life.

William Littlejohn O’Halloran arrived in South Australia on 9th August, 1840, almost twelve months after purchasing a Land Order for Section 7. He spent the first couple of years clearing and developing his section which he named “Clanfergeal”. The whole section soon became well established, fenced by bank and ditch and with a well sunk to a depth of fifty one feet (15.5 metres). Two acres were enclosed with an iron fence, presumably to protect the half an acre of potatoes, quarter acre of garden and an acre of maize, and a large brick dwelling-house and stockyard.

Water leaving the hills cut deep chasms across the paddocks once it reached the newly cleared clay soils of the plains and furrows made by the land holders with their ploughs. William L. O’Halloran records that much of this water formed large ponds across Daws Road for nearly two thirds of the year, sometimes to a depth of 3 feet.

On 12th May 1853 the South Australian Government Gazette proclaimed that the first District Council in South Australia of Mitcham has formed. The first council assessment listed five mansions, including “Clanfergeal”, J.W. Daw’s house and Thomas Overton’s house on what we now know as Colonel Light Gardens.

By 1868 several acres had now been sliced off Section 8 to form Daws and Goodwood Roads, while William Henry Shephard and his brother William Thomas decided to try their luck as pastoralists near Waikerie and leased part of Section 8 to William Chester and James Pinchback between 1871 and 1875.

Before the lease had expired the land was sold to George Pickett on 9th September 1874 where the land was then mortgaged to Alfred Spence giving some indication of when the little cottage was built on Allotment 17 facing Daws Road (approximate location of Springbank’s Tower Art Centre carpark).

Will documents seem to indicate that Hannah and George Pickett may have separated before she died in the spring of 1895 in Ireland. Hannah bequeathed £20 a year to her husband provided he remained a widower; George Pickett died on 17th June 1912 without leaving a will. The property then was passed onto Hannah’s brother, John Fleming, a farmer from Springbank before he leased the land to Albert B. Burford for five years. The lease was then transferred to Frederick Spackman, a farmer of Clarence Park in 1904 and onto Frederick Ashley Cooper, a stable keeper in North Croydon. Henry Cecil Herbert, a farmer of Goodwood Road took up a lease on 25th March 1905, and finally John Fleming leased it to John Maley until 1907.

Upon John Fleming’s death on 7th January 1909 administrators transferred the property to Eli Packer, the husband of John Fleming’s daughter Ellen. Eli did not appear to work the land as he was already in his mid 60s, but leased it to Thomas Farrelly who, within a month, resigned it over to a Springbank dairyman Robert Chambers for 5 years. Albert Norris then took out a four year lease between 1916 and 1920 before the ownership divided between three men; Arthur A. Hill of Malvern, Philip Waghorn of Torrens Park and the current owner and mortgage holder Eli Packer in August 1924. These three men agreed to subdivide the land as Goodwood Road Estate, but Eli Packer died in September 1925 at the age of eighty.

After the first World War (1914-18) there was a high demand for housing allotments as the soldiers returned and were anxious to settle down to civilian and family life. The big attraction to suburban living in the 1920s was the government scheme of the Model Garden Suburb divided into quarter acre blocks (known as roods) where the army embarkation camp had been. The north eastern part of this area became known as Colonel Light Gardens, while the villages of St. Marys and Springbank were laid out in the 1850s and so the 1920 developers simply picked these suburb names with Springbank Gardens to the south and St. Marys to the west of present day Springbank Secondary College.

The south west corner of Daws and Goodwood Roads, part Section 8, was subdivided into an “L” shape of one hundred and fifty two allotments as Goodwood Road Estate. To square off the area, a further ninety allotments were subdivided by Stanley E Bowes as Goodwood Road Estate Extension. Allotment 17, where a little cottage sat since around 1874, was sold to Nicholas C. MacCormac on 12th August 1925. The surveyor for the subdivision was William M. Barry of Barry and Moyle however it is believed that Philip Temby and Eli Packer were responsible for naming the streets.

Southern Avenue was continued from St Marys Park to Goodwood Road, Western Avenue remains to this day from Seaview Avenue (now McIntosh) to Daws Road, Hill Avenue is now known as Boorman, Rugby (changed to Burton) no longer exist, along with Ormond, Royal and Verdant Streets that now occupy the site of Springbank Secondary College. These street names changes occurred in 1951 after the South Australian Government bought up the unsold allotments.

Between 1927 and 1935, during the Depression years, only thirty four allotments were sold, mostly in pairs to fifteen people with half of them registered in women’s names. It is unlikely that any of these allotments were built upon due to lack of finance and the building material restrictions imposed from WWII.

In January 1947 most of the remaining unsold allotments were acquired by the South Australian Government along with some that had been privately owned but taken over by the Defence Department at the outbreak of war. Timber framed, corrugated iron clad, oblong army huts were erected on part of Section 8 to form the Springbank Camp. These huts were used as sleeping quarters, mess huts, offices etc.

After the war the South Australian Housing trust contracted E.F. Marshall & Sons to carry out the building and conversion work into 104 dwellings each consisting of a kitchen-living room and one, two or three bedrooms; each dwelling also had an adjoining bathroom and water closet. Electric lights, wood stoves and kitchen sinks were provided by the occupants. The fabricated huts were also converted into laundries and a small general store. 300 dwelling extended westward to Cashel Street and became the first army camp to be converted for private and emergency housing.

Late in 1962 three or four allotments were transferred from the Government to the Minister of Education, but it was not until 20th August 1970 that twenty one acres of part Section 8 and 9 which included the greater portion of the old subdivision of Goodwood Road Estate and Extension were transferred to the Minister of Education. A portion of Southern Avenue and the whole of Burton, Canada, Royal and Verdant Streets were closed in December 1968.